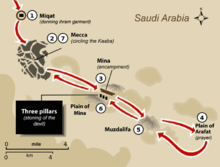 Fiqh literature describes in detail the manners of carrying out the rites of Hajj, and pilgrims generally follow handbooks and expert guides to successfully fulfill the requirements of Hajj.[36] In performing the rites of hajj, the pilgrims not only follow the model of Muhammad, but also commemorate the events associated with Abraham.[37]

When the pilgrims are about 6 miles (10 km) from Mecca, they enter into a state of holiness – known as Ihram – that consists of wearing two white seamless cloths for the male, with the one wrapped around the waist reaching below the knee and the other draped over the left shoulder and tied at the right side; wearing ordinary dress for the female that fulfills the Islamic condition of public dress with hands or face uncovered;[38][page needed] taking ablution; declaring the intention (niyah) to perform pilgrimage and to refraining from certain activities such as clipping the nails, shaving any part of the body, having sexual relations; using perfumes, damaging plants, killing animals, covering head (for men) or the face and hands (for women); getting married; or carrying weapons.[7][11] A place designated for changing into Ihram is called a Miqat. The ihram is meant to show equality of all pilgrims in front of God: there is no difference between the rich and the poor.[37] 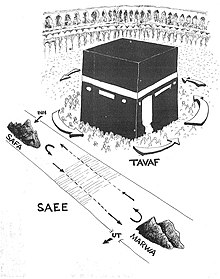 Direction of the Tawaf around theKaaba

Tawaf means walking seven times counterclockwise around the Kaaba.[39] Upon arriving at Masjid al-Haram, pilgrims perform an arrival tawaf either as part of Umrah or as a welcome tawaf.[40] During tawaf, pilgrims also include Hateem – an area at the north side of Kaaba – inside their path. Each circuit starts with the kissing or touching of the Black Stone (Hajar al- Aswad).[41] If kissing the stone is not possible because of the crowds, they may simply point towards the stone with their hand on each circuit. Eating is not permitted but the drinking of water is allowed, because of the risk of dehydration due to the often low humidity in Mecca. Men are encouraged to perform the first three circuits at a hurried pace, known as Ramal, and the following four at a leisurely pace.[38][page needed][41]

The completion of Tawaf is followed by two Rakaat prayers at the Place of Abraham (Muqam Ibrahim), a site near Kaaba inside the mosque.[41][42]However, again because of large crowds during the days of Hajj, they may instead pray anywhere in the mosque. After prayer, pilgrims also drink water from the Zamzam well, which is made available in coolers throughout the Mosque.[43]

Although the circuits around the Kaaba are traditionally done on the ground level, tawaf is now also performed on the first floor and roof of the mosque because of the large crowd.

Tawaf is followed by sa'ay, running or walking seven times between the hills of Safa and Marwah, located near Kaaba.[39][42] Previously in open air, the place is now entirely enclosed by the Masjid al-Haram mosque, and can be accessed via air-conditioned tunnels.[44] Pilgrims are advised to walk the circuit, though two green pillars mark a short section of the path where they are allowed to run. There is also an internal "express lane" for the disabled. After sayee, the male pilgrims shave their heads and women generally clip a portion of their hair, which completes the Umrah.